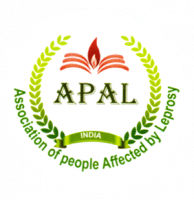 Association of People affected by Leprosy (APAL) earlier known as National Forum-is a national networking organization of people affected by leprosy, founded in the year 2006 with active encouragement and help from the Nippon Foundation, Japan. It forms an essential part of Mr. Sasakawa’s vision of mainstreaming the affected population and their families in restoring their dignity.

Journey of empowerment: a case study of the Association of People Affected by Leprosy (APAL), India